Togo is a small country (22,000 sq mi) located on the Gulf of Guinea and bordered by Benin, Ghana, and Burkina Faso. Its economy is largely based on agriculture, which accounts for 40% of the country’s GDP, and two out of every three inhabitants of Togo depend on crop and livestock farming to live. The major crops grown in Togo are corn, sorghum, rice, yams, manioc, peanuts, beans, and soy. Poultry farming is practiced by 80% of smallholder families. Togo’s major exports are coffee, cocoa, and cotton. However, despite the size of the country’s agricultural sector, more than half of the population suffers from food insecurity. Six out of every ten inhabitants of Togo live in poverty, most of them belonging to smallholder farming families. Since 1988, AVSF has been working to address four major issues: sustainably increasing smallholder crop and animal production, improving sales, strengthening smallholder organizations in strategic supply chains, and gaining recognition for the place of smallholder women in the national economy.

AVSF’s work in Togo began in 1988 and was initially aimed at improving small-scale livestock farming and animal health systems in a country that was woefully lacking veterinary workers. AVSF trained more than 1,400 village livestock farming assistants, who currently vaccinate more than 20% of the country’s traditional poultry. AVSF helped these assistants gain official recognition from the public veterinarian authorities. AVSF also built more than 3,000 enhanced traditional henhouses in order to improve the farmers’ productivity.

AVSF has also been involved in the grain sector since 2004. Working alongside its partners, INADES and the Centrale des Producteurs de Céréales, AVSF was able to provide 4,000 small-scale grain producers access to fertilizer via loans that were adapted to each borrower, while at the same time supporting experiments aimed at improving the natural fertility of the soils at the field-schools and developing agro-ecological practices. Since 2010, AVSF has been advising and assisting organizations of small planters in the cocoa sector in the creation of an organic and fair trade certified supply chain for cocoa that directly integrates more than 700 male and female producers within the organizations.

Organic and fair-trade cocoa in Togo

Helping an organization of 650 small-producer families in Togo build capacities for the production and sale of organic and fair-trade cocoa. 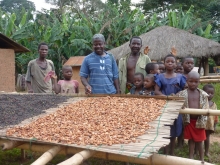 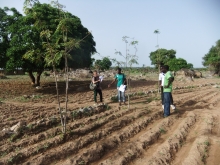