Guatemala is one of the most unequal countries in the world. Statistically, Guatemala is a middle-income country, but behind the figures hides a reality of enormous disparity. Guatemala’s Indian population, which makes up a majority of the total population and lives predominantly in rural areas, is subjected to very high levels of economic, social, and political marginalization. The poverty rate in rural areas is 66.5%.

Guatemala’s poverty-stricken Indian population, which inhabits a majority of the country’s land, is mainly concentrated in the highland and agricultural border regions. The biggest challenge that the Indian population faces is controlling and managing its land and its natural resources (land, water, forest, biodiversity). The Indian population is often at odds with the traditional oligarchy, which still controls a large majority of the government and implements aggressive extractive strategies (agro-industrial plantations, mines). Since 1980, AVSF has therefore been helping these Indian communities defend their lands, collectively and sustainably manage natural resources, and promote their products on local markets.

AVSF first began working in Guatemala in the middle of the 1980s, amidst a difficult context marked by armed conflicts, to improve the health of animals and of smallholder families. This work helped to repair the social fabric in certain rural areas by creating local systems, managed collectively by the smallholder families themselves, for supplying veterinary medicine.

Today, AVSF works with Indian populations to help ensure that their lands and natural resources are collectively managed in an efficient and sustainable way. Participative mapping and a joint development plan between the Indian authorities and the local authorities are just some of the tools that have been successfully developed. Agricultural diversification by promoting small-scale livestock farming, agro-ecological practices, and the creation of local smallholder markets has improved the food sovereignty of more than 3,000 families.

In all of its activities, AVSF focuses on strengthening the traditional Indian authorities and integrating women and young people in their functioning. 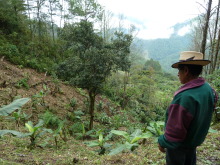