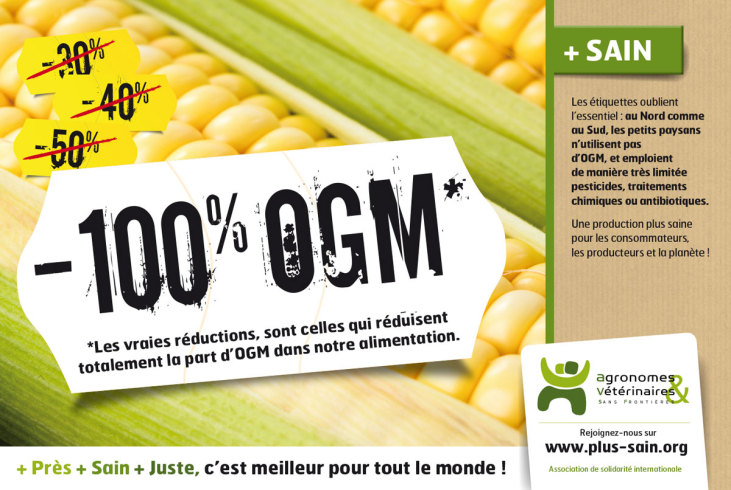 Focusing on stomachs in the North to better address issues in the South!

A positive campaign with a sense of humor to highlight the benefits of agro-ecology
Agronomes et Vétérinaires Sans Frontières (AVSF) is an officially recognized non-profit association that has been supporting smallholder farming in the South since 1977. AVSF offers professional skills in farming, livestock raising, and animal-health services to smallholder communities that are threatened by exclusion and poverty.
AVSF defends agro-ecology*: Agro-ecology is an important solution to the problems that rural areas face in terms of food, the environment, the climate, health, and employment.
AVSF is launching its first-ever publicity campaign because the association is convinced of the importance, in both the North and the South, of consuming healthy, locally produced food sold at fair prices.
*Agro-ecology: Agro-ecology is a farming system that follows and makes use of the cycles of nature (for example, the natural fertility of soils and the water cycle). This system increases the lifespan of soils and protects biodiversity: a combination of different plant species is grown in the same field and natural fertilizers are used to fertilize the ground. Agro-ecology brings consumers and producers closer together by promoting shorter supply chains.

A positive, attention-grabbing campaign with a sense of humor:
We have created visuals that grab the eye’s attention and encourage ethical consumption practices. By taking food advertisements and labels and giving them a humorous spin, we hope to get our message accross to consumers and inspire people to support our cause.

The objective of the campaign:
The campaign aims to remind people that, in both the South and the North, it is absolutely necessary, for the benefit of both the producer and consumer, to promote the local production of healthy foods that fetch fair prices at the market.
This campaign seeks to attract the attention of those who support the consumption of organic, fair-trade, and/or locally produced goods, and who believe in the idea of agro-ecology and in the importance of supporting smallholder production. AVSF hopes that, with 35 of experience working on the ground to promote agro-ecology, it will be able to rally the public around these common values.

Frédéric Apollin, Director of AVSF, says:
”Our position is directly linked with our global vision of agro-ecology. The objective is the same in both the North and the South! We have every reason to defend common positions in both the North and the South when it comes to defending and promoting smallholder farming. The agro-ecological system that we are defending in Peru, Togo, and Cambodia is the same one that we should all be defending in France: a local farming system that creates jobs in rural areas, that protects the environment and the land, that ties into the social and solidarity-based economy, and that plays an essential role in suppling both cities and rural areas with a wide selection of fresh and healthy produce. At a time when our newspaper headlines are dominated by a scandal involving untraceable 'beef,' it is clear that these are extremely important issues.”