Setting up agricultural activities for 2,400 smallholder families in southern Laos to reduce malnutrition 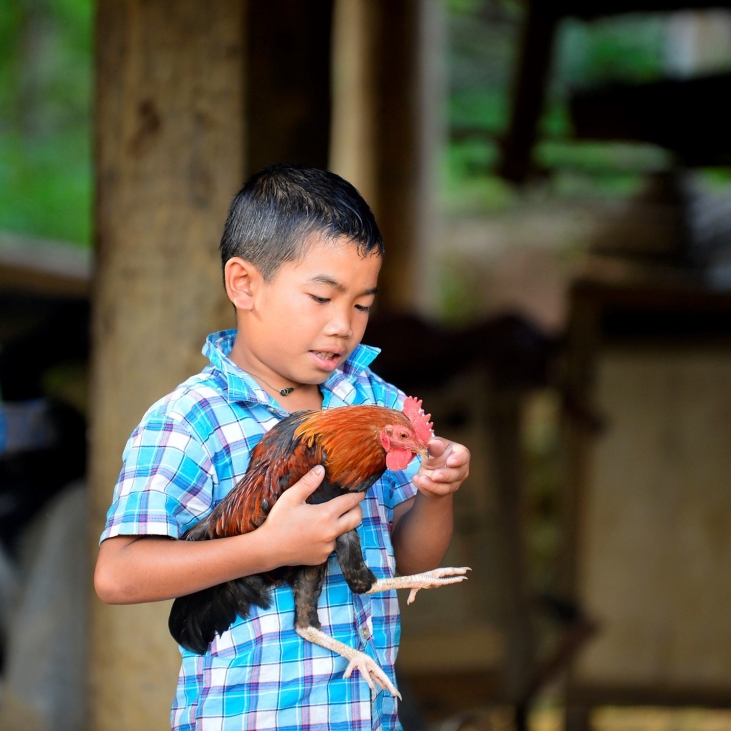 One of the biggest societal issues in southern Laos is the problem of malnutrition, which affects a large portion of the population, particularly children. According to the WHO, 44% of children under five years old have stunted growth, 27% are underweight and 6% are considered emaciated (marasmus)—among the highest rates in the West Pacific region. The situation is caused in part by a lack of diversity in the local diet. Certain essential nutrients—such as proteins, vitamin A, iron, etc.—are severely lacking in the foods consumed.

In terms of agriculture, smallholders in Laos produce mainly rice and raise a few head of livestock per family (cattle, goat, pig, poultry). Some grow off-season crops (dry season) in order to diversify production and boost income for their family, while also collecting/hunting/fishing for non-wood forest products. The rising population and pressure on land (industrial farms, mines, etc.) are putting more and more strain on natural resources. Renewal of those resources is becoming less and less reliable, which is putting the sustainability of those socio-ecosystems at risk. It is becoming increasingly difficult to find wild resources, whether animal or vegetal, which means that collection (usually performed by women) is more time-consuming without necessarily covering families’ nutritional needs.

In 2018, AVSF and its partners launched a three-year project to promote food security and reduce malnutrition for rural communities in southern Laos. The project covers 12 districts in the provinces of Savannakhet, Saravane and Attapeu. Within those 12 districts, 124 villages were selected based on criteria linked to malnutrition rates, with more than 2,400 families benefiting from the project.

AVSF is in charge of setting up agricultural activities to produce enough diversified food to cover the nutritional needs of the target populations. Doing so involves supporting and developing small-livestock farming (grasshoppers, poultry and frogs), which provides animal proteins as well as potential income through the sale of any surplus. Efforts to set up market gardening and rice cultivation will help diversify food and ensure its availability throughout the year. Post-harvest management will also be addressed, particularly through the improvement of drying procedures and storage conditions to minimize losses. Lastly, the training of village animal-health assistants will help ensure the longevity of livestock farming by reducing livestock mortality rates.

In addition to diversifying food and making it more available, the development of crop and livestock farming helps ease the pressures exerted by communities on their own environment. Producing food reduces dependency on wild resources and thus promotes more sustainable management of the ecosystem. Women (particularly mothers with young children) do not have to stray so far from their villages and can take care of their children, particularly by breastfeeding.