Working in support of the most vulnerable smallholder families

Nearly half of the Honduran population lives in rural areas, where the poverty rate is very high. Honduras has experienced strong economic growth, but this growth has not led to higher incomes or significant growth in the employment market. On the contrary, the levels of inequality have risen, particularly since the political crisis of 2009.

This situation particularly affects smallholder populations in the most isolated regions of Honduras, namely those in the south (Choluteca, Valle) and west (Intibucá, Lempira, La Paz) of the country. Smallholder farming, however, is extremely important for Honduras’ food sovereignty and food security. Two key areas to focus on therefore are boosting agricultural production and strengthening local economic initiatives to better promote this production on local markets. Another major issue is getting smallholder, economic, and social organizations to work together on land management with local authorities and other economic actors.

AVSF’s work in Honduras, which began in the early 1990s, made possible the creation of a system for supplying veterinary medicine, a system based on the structure of livestock farming associations in southern Honduras.

In the Intibucá region, AVSF helps defend the rights and interests of Indian populations from the Yamaranguila zone by diversifying agricultural production and supporting initiatives for the processing and sale of their products. 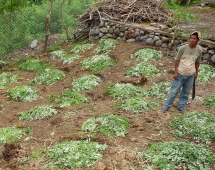 Improving the food security of 500 families in Yamaranguila by supporting initiatives for agroecology, the marketing of goods and local economic development

Agroecology for Lenca women and young people in Honduras

Helping 1,000 Lenca families improve their skills in the production and sale of agroecology products; helping women and young people market their goods and influencing local and national public policy