Smallholder farming that holds its own against the agro-food industry

Ecuador is a small South American country with abundant natural resources and a rich ethnic and cultural diversity. It is a middle-income country with a strong economic dynamism, even though one-third of the population still lives in poverty. Ecuador also has an agricultural sector that operates at two speeds. On the one hand is the dominant export-oriented agricultural model with negative environmental and social impacts, and then there is smallholder farming, which focuses more on feeding Ecuadorians. Smallholder farming faces challenges in terms of access to land, water, credit, and markets and does not receive much support from the government.

Proving the importance and effectiveness of smallholder farming

AVSF has been working with smallholder and indigenous organizations since 1983 to develop innovations in the sustainable management of natural resources and rural areas and in better promoting smallholder products. By combining local projects that support smallholder organizations and their networks with national projects in research and training, AVSF assists in the development of public policy that supports smallholder farming.

AVSF’s projects have also allowed for better integration of smallholder farmers into markets: 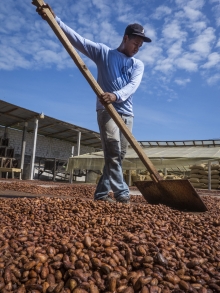 Agroecology in the Ecuadorian Andes

Water sharing in the Ecuadorian Andes

Creation of a drainage-basin committee focused on protecting and equitably sharing water resources between the city of Riobamba (150,000 inhabitants), indigenous smallholders, and other drainage-basin users; advising and supporting this committee.