AVSF has been supporting nomadic livestock farmers in Mongolia since 2004, helping preserve not only their culture and their traditional way of life (which is arduous yet fragile, and based on respect for the natural environment) but also their main activity for economic survival.

The tradition of nomadism is in danger

Twenty years after ending their ties with the USSR, Mongolia is experiencing strong economic growth due to a recent mining boom. In Mongolia, whose land area is three times bigger than France and whose population density is the lowest in the entire world, there are major differences between the modern urban areas and the rural way of life, traditionally characterized by extensive nomadic livestock farming.

Between privatization and environmental issues, Mongolian livestock farmers are seeking to keep alive the socio-cultural model of nomadism, the basis of their economic life. However, the survival of this practice, which is adapted to difficult natural conditions, is threatened by the many upheavals that the country is currently experiencing. The farmers have a hard time promoting their products, which leads them to increase the size of their herds, which in turn threatens the equilibrium between the livestock and the natural environment, a phenomenon that is then exacerbated by the effects of climate change. The lack of structure within rural society reduces the farmers’ ability to think together on solutions to these problems and to take control of their own destiny.

AVSF created livestock farmer federations in the Arkhangai (more than 850 livestock farmers) and Bayankhongor provinces, which are now capable of managing the animal health and zootechnical advising services. AVSF also developed supply chains for the sale of high-quality animal products on the national (meat and milk) and international (yak fiber and cashmere) markets. As a result, the 120 families of the yak farmer cooperative from the Khangai Mountains (created with the assistance of AVSF) export large quantities of yak down to Europe and North America. The federations, assisted by AVSF in improving their capacity to defend their members’ interests vis-à-vis decision-makers, are also leading groups of livestock farmers to use water and pasture resources collectively and sustainably. 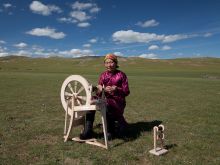 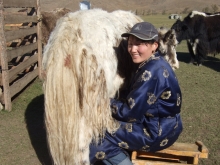 Nomadic livestock farming in the Arkhangai province of Mongolia

Promoting the sustainable management of pastoral and water resources for more than 850 semi-nomadic livestock farmers in the Arkhangai province; supporting the promotion of livestock-farming products (milk, meat, fiber) and supplementary market-gardening 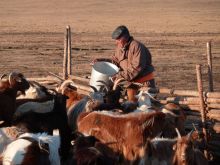