In September 2011, poverty and food insecurity rates reached extreme levels in Madagascar. At the national level, 76.5% of the population lives below the poverty line of $234 per person per year, but this number is higher (82%) in rural areas. Agriculture, however, remains a crucial sector. Smallholders make up 70% of the country’s population, but they are faced with numerous challenges such as a lack of services, difficulty selling their products and accessing capital, etc. To make matters worse, land is distributed unequally, and the country suffers from severe deforestation as a result of: land clearing for coal production, firewood and construction wood collection, slash-and-burn agriculture, and the illegal commercial logging of precious woods. In addition, experts from the IPCC consider Madagascar to be one of the three most vulnerable countries to climate change. There are twice as many cyclones per year now than there were 20 years ago. AVSF has therefore been helping rural Malagasy families since 1992 to secure and develop their crop or livestock production in the face of growing risks.

AVSF is recognized in Madagascar for its long-standing engagement working in support of livestock farming and establishing high-quality local animal health services. More than 120 community animal health assistants have been trained and are still active and accessible to more than 10,000 families. AVSF also supports the development of small-scale “gasy” chicken farming, which benefits from a very big local market.

Since 2000, AVSF has diversified its work in order to better respond to the needs of the people it seeks to help. In several regions of Madagascar, AVSF promotes the spreading or improvement of agro-ecological techniques that are adapted to smallholder conditions and not harmful to the environment. Rice and manioc production has doubled as a result. In order to help the Malagasy people adapt to future problems related to water access, AVSF also established a nationwide market chain of small-scale manufacturers and distributors of low-cost micro-irrigation (drip) kits. Less than three years later, more than 10,000 smallholder families are already using these kits, which have helped facilitate the expansion of market gardening and fruit growing, enabled smallholders to increase their income, and reduced the arduous nature of their work, particularly for women.

Madagascar also exports a portion of its agricultural production and is the world’s leading exporter of vanilla. It also exports pepper, cloves, litchi, and essential oils, but the traditional supply chains do not always fairly remunerate smallholders for their work. AVSF works alongside its European commercial partners, particularly Ethiquable, to establish cooperatives of producers who already sell fair trade certified litchi and vanilla in Europe. These cooperatives are already yielding positive results: some producers have even doubled their income in these supply chains. 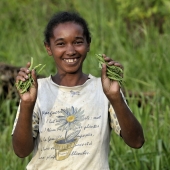 Micro-irrigation and adapting to climate change in Madagascar