The commitment of Benoît Maria in Guatemala

Assassinated on August 10, Benoît Maria had been developing agricultural projects and defending the rights of peasants and indigenous communities in Guatemala for more than 20 years. 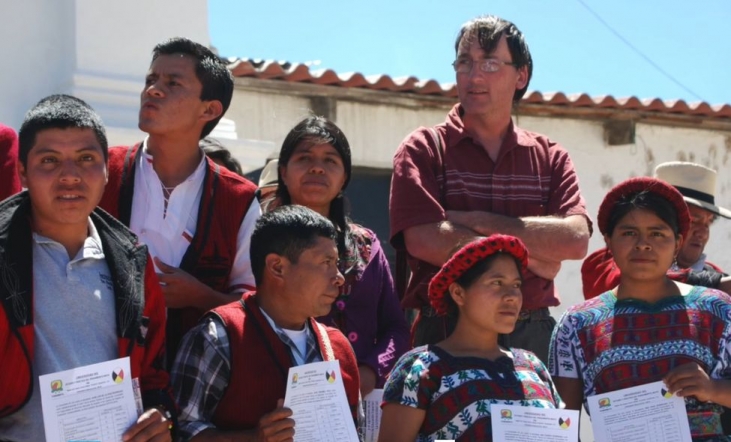 A flawless commitment alongside AVSF

"The challenge of his work was to enable peasants of the Ixil and Q'eqchi 'communities to support their families by cultivating the land," says AVSF Managing Director Frédéric Apollin. “He brought his knowledge in agriculture and animal husbandry and especially worked on the revalorization and improvement of traditional knowledge, that one transmitted by the elderly. "

Benoît Maria, called “Benito” by his relatives and colleagues, contributed with AVSF promoting diversified and agroecological peasant agriculture in the indigenous communities, by reviving the knowledge of the elder. Benito worked so that indigenous peasants could sell their products on local markets and co-created the Ixil University, to revalue and transmit ancestral knowledge to young people.

A defender of indigenous peoples’ rights and peasant agriculture

With our partners in Guatemala, Benito also helped communities defend their rights over the land in the risk of land grabbing and in particular to resist offers from the largest landowners, who press indigenous families to sell their land for small sums of money.

“One of the main tasks was to identify and reference the plots of the communities, a job not done by the state. Benito taught young peasants, men and women, how to use the GPS to establish a sort of cadastre and to claim, by legal means, the collective property on their territory ", continues Frédéric Apollin.

The projects he was working on with AVSF were the defense of:

• The Q'eqchi indigenous territory: Support for the recognition of judicial decisions by indigenous authorities in Chisec to manage their community lands and territories, and the promotion of agriculture among 300 peasant families.

• The Ixil indigenous territory: Support for the organization of the community of the Ixil Indian peoples by training 100 Indian authorities, 100 young people in land law and planning, and by the dissemination of agroecological production practices to 300 peasant families (project file in Spanish).

• Indigenous peoples' lands in Guatemala: Assistance to 80 indigenous communities and organizations to increase their influence on the definition, monitoring, and implementation of laws and public policies that guarantee the access and control over the land and the natural resources of their communities and territories (project sheet in Spanish).

AVSF remains deeply shocked and saddened by the death of Benoît. We are losing a committed colleague, a great solidarity professional and for many of us, a friend. We will do all we can at the legal level to ensure that the ongoing investigation is carried out transparently and that justice can be done.

The brutal departure of Benito is also a testimony of the deep, militant, and fundamental meaning of our action with the peasant and indigenous communities, and the defense of their rights that they murdered.